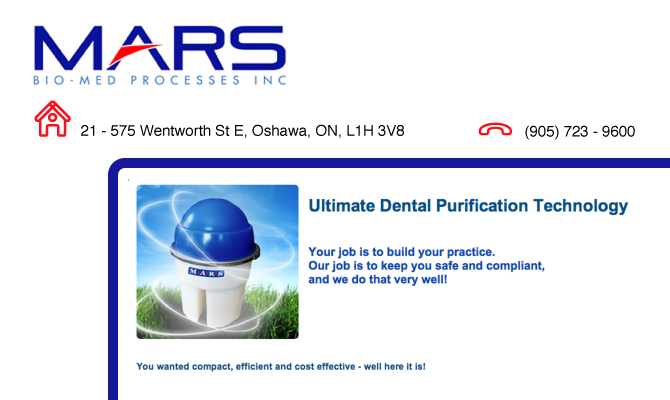 M.A.R.S Bio-Med Processes is a privately owned manufacturer that began in September of 2005 after recognizing that there was a great level of concern for personal safety and the environmental consequences of having unmonitored dental amalgam mercury in the clinical setting. We set out to create the world’s finest and safest amalgam separator and the most powerful yet kindest, 100% biodegradable dental water system cleanser.

We have achieved our mandate. In May 2006, at Globe 2006 in Vancouver, BC, M.A.R.S’ AmalgamBOSS will have the unique distinction of being presented with the ETV Canada award for outstanding achievement in the amalgam separator category by the Minister for Environment Canada.

Our people are dedicated to turning environmental issues into leading products that help solve dentistry’s challenges. We have combined our extensive manufacturing experience with the support of scientists and leading-edge testing facilities to deliver the best quality amalgam separator, and the best quality dental system water to dentists, to society, and the environment.

The AmalgamBOSS is the best in its category when rated by international government standards. ETV Canada was the final arbiter of the AmalgamBOSS’s performance.

M.A.R.S believes it has a responsibility to the community and the planet. Every year, 2% of profits shall be allocated for charitable causes: