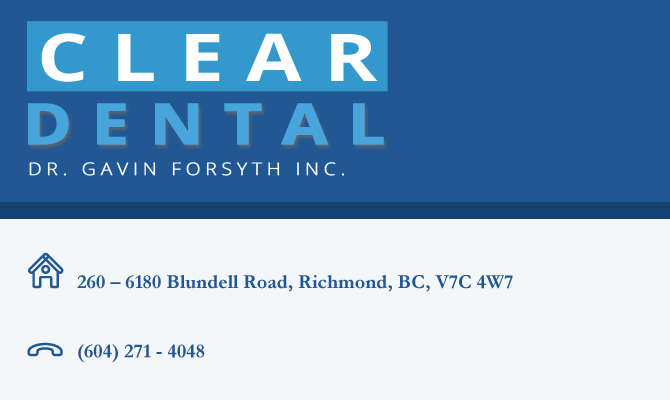 Clear Dental believes in providing the best possible care for all of our patients, whether it’s preventive, restorative or cosmetic dental procedures. We enjoy meeting new patients of all ages and developing long term relationships with them and their families.

Dr. Forsyth grew up in Vancouver and attended UBC Dental School where he graduated in 2000.

Prior to his dental career, he was active in competitive alpine skiing, and he represented Canada internationally as a member of the Canadian National Alpine Ski Team. In his final year of competition, Gavin represented Great Britain which gave him the opportunity to compete at the 1992 Winter Olympic Games in Albertville, France.

Dr. Forsyth enjoys the technical aspects of dentistry, and particularly he relishes in building relationships and becoming a part of his patient’s extended families. He also believes his professional license gives him an opportunity to learn new dental skills, and Dr. Forsyth is committed to a career of continuing education.

Gavin enjoys spending his spare time with his wife and two daughters, and really enjoys riding and occasionally racing his bicycle. Gavin has been very active in his bicycle club, and was the race director of the BC Time Trial Championships for a number of years.

Dr. More immigrated to Canada, where he completed a residency at Vancouver General Hospital, and after a short associateship in Vancouver, he opened his first practice in 100 Mile House, BC in 1971.

He relocated to Richmond in 1980, where he continues to enjoy all aspects of dentistry, particularly collaborating with Dr. Forsyth. In his spare time, Dr. More enjoys golfing and curling. Dr. More has three grown children, and an ever increasing number of grandchildren.

Dr. Anna Pranata grew up in Winnipeg, Manitoba where she attended the University of Manitoba Dental School. She graduated in 2010 and worked for two years before moving to BC with her husband and two dogs. She now enjoys taking her dogs to the beach, biking, jogging, and snowboarding in BC’s milder climate.

During dental school Dr. Pranata participated in her first dental mission to Guatemala. Since then, she has been involved in two other dental missions to Guatemala and hopes to continue her involvement. Helping people is an important part of dentistry for her. In Vancouver she enjoys educating and empowering her patients to meet their oral health goals. She loves improving her skills and continuing her dental education by being active member of the Vancouver Study Club.

Dr. Pranata loves getting to know people and strives to provide excellent dental care with patience and gentleness. She welcomes any new patients to the office.